Canadian Thanksgiving is today - and I just have to tell you about a recipe I found. Bryanna Clark Grogan came to my rescue when I wanted to make a 'traditional' (well, you know, the vegan version of traditional) Thanksgiving Dinner for the two of us. Going to

I found a whole series of possible recipes and finally settled on Bryanna's Seitan and Soy 'Turkey' along with a version of her stuffing. You'll need to scroll down past the first few recipes to find what I made.

The seitan and soy 'turkey' I did in a simple version, just as a roast, but next time I'll actually stuff the make-believe 'critter' and even, perhaps put the beancurd 'skin' around it. Her directions are pretty clear, and it'd be fun to try something a little more challenging visually.

The roast was succulent, tender, and to my vague recollection almost realistic. The flavour? Out of this world! Here it is below, in a boring rectangular shape (as I say, next time . . .) and topped with some mushrooms.

The stuffing I cooked a little more than she said (because it wasn't going into the roast), substituting sage for other herbs, and piled it into a halved and pre-cooked buttercup squash. This I popped back into the oven to crisp up on top. Lovely.

For the record, this weekend's weather has been out of this world - 26 C today - so I made the 'turkey' roast yesterday and baked the squash early this morning, leaving me only to reheat these items. All this was so that we could get out and enjoy the sunshine - a luxury here at this time of year. 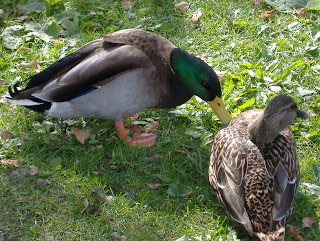 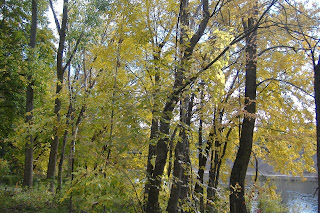 Happy Thanksgiving to any Canadian readers!
Posted by River at 5:10 p.m. 3 comments: 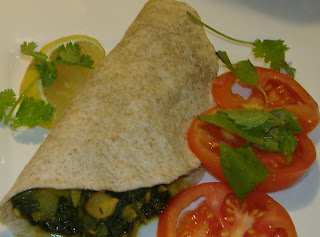 One of my favourite things to eat when we're out is Chickpea and Potato Roti - Jamaican style. Well, I don't know anything about that (never having been there) but as you know I love hot and spicy food. So one lunchtime I scrambled together some spinach out of a frozen pack, added onions and garlic browned in a pan to go with it, and tossed in some pre-cooked chickpeas out of my freezer along with a sprinkling of this and that from my Indian spices. Well, so far we had a 'stew' (smelling wonderful, I admit) but nothing to set it off. Fishing in the freezer for some tortilla wraps (desperate, wasn't I?), I quickly steamed them up and used them as an impromptu 'roti' to enclose, more or less, the vegetables that were simmering in the pan.Needing some salad-type things, I sliced heirloom tomatoes and, for the sake of the greens, quartered a lemon. The result was delicious - and quick to prepare. I have made it, with various greens from the refrigerator, several times since :) Leftovers work well too!

The next dish, also inspired by the perceived need to Eat More Greens was simple:

COLLARDS WITH POTATOES AND MUSHROOMS 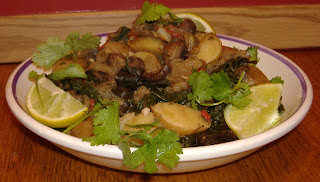 Rather than curried, this dish had the advantage of chilies and cumin to spice it up. The usual suspects - garlic and mushrooms - worked together with some lovely fresh collard greens from the market, and a lone 4 or 5 ounce potato was finely diced to cook with them in the same amount of time. Mushrooms, barely cooked at all, completed the picture. A little garnish, and the very simple meal was a delight. 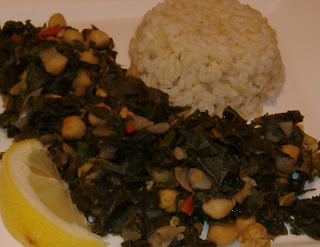 Similar to the dishes above, above is another dish with lots of lovely greens, cooked with the usual suspects and probably a few more:)

Well, someone put me onto the idea that not everyone is as lucky as we are and is able to tolerate gluten. (That's the stuff in many flours, folks, which plays riot with some systems.) We don't eat a lot of bread, but I was feeling rather smug about using the whole wheat tortilla wrap earlier (see above) and thought maybe I should get out of that. What to have instead? Well, I can't buy corn tortillas easily here (perhaps I shop in the wrong places), so I was going to have to make corn tortillas myself. I got a little yellow corn flour (that I _did_ find) and found recipes on the net.

Whoooooooo-ooooo! Are you all laughing now??????? Did I have any clue as to how difficult it was to make a corn tortilla? Nooooo, I did NOT! LOL So here, a very humbling admission, is my first attempt at tortillas. 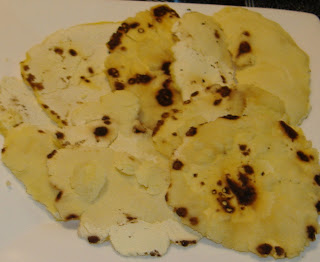 Not a pretty sight, are they? ;) What didn't fall apart got stuck to the pan or got overcooked! However, I still have some corn flour left and I will - I definitely will - keep trying, because the taste was great all the same.

I put a couple of the more acceptable results to have as flatbread with my lunch of greens with whatever (can't recall just now). Not bad. Truly, not bad! 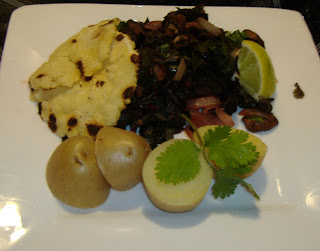 By these little acts of humility shall thee know them!
Posted by River at 7:17 p.m. 2 comments:

Apart from some enormous salads, platters of crudite, bushels of fruit and the like,this summer has been pretty well a wash-out as far as brining this blog exciting recipes. The market produce has been fabulous - from tiny bokchoy barely twice the size of a single clove of garlic - 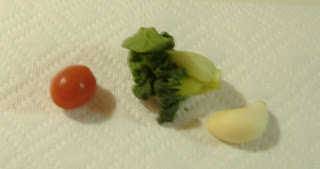 - so delicate that cooking seemed a shame, to wonderful heirloom tomatoes, purple and golden cauliflowers 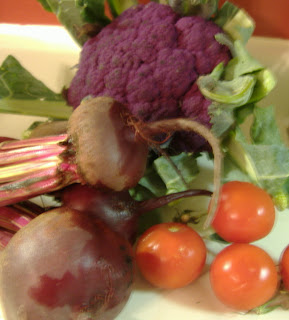 and all manner of greens, we have had a great time. But we haven't done much cooking. Here are a couple of things: 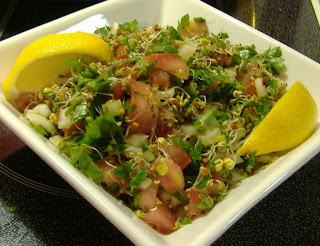 Not wanting to use cooked grain, I made this from sprouted lentils and seeds, plus some of the usual things people put into various kinds of tabouleh. Beautifully dressed with fresh lemon (who needs ooil!), it was welcome and refreshing! I plan to do it this way more often. (Why 'longstocking'? Because 'longlegs' sounded too, er, anatomical!)

BEETS WITH THEIR OWN GREENS (RAW) 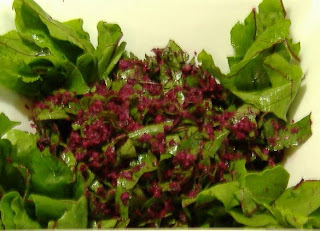 I have one or two variations going on my Beets Cooked With Their Own Greens elsewhere on this blog and other places, but RAW? Yup. I grated the beets and tore the delicate greens into bit-size pieces and dressed the salad as if it were for the cooked dish.

This next is, if anything, a very simple 'hybrid' dish - cooked plus raw, so very plain that it seems foolish to include it, but oh with the lovely fresh veggies it was outta sight! So here you have 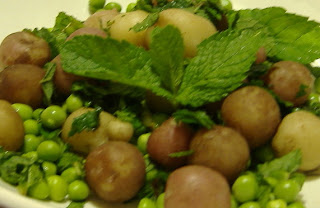 And my plate on one occasion: 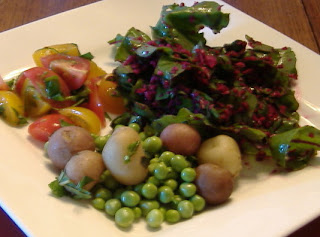 As you see I had added a tomato salad.

And now off to the market to find some lovely greens for today's lunch! 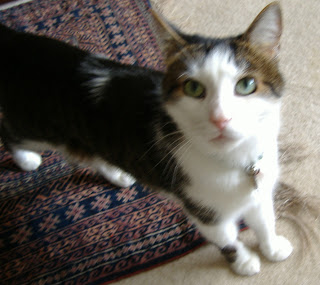 (The little guy in the above photo is our co-resident Misha.)
Posted by River at 8:09 a.m. 2 comments: 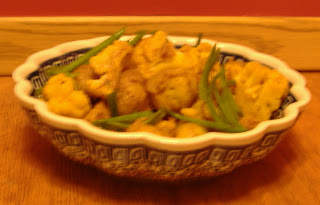 FROM: http://www.quickindiancooking.com/2007/03/16/aloo-gobi/
and posted with kind permission of Mallika, who originated the recipe there.

Photos are mine taken in my own kitchen.

Heat the oil and fry the onion, garlic and ginger. Throw in the potatoes, all the powders apart from the garam masalas, add a tiny bit of water, cover the pot and cook the potatoes.

Don’t add too much water but make sure there is just enough to cook the potatoes.

When the potatoes are almost cooked (you will be able to insert a fork into the potatoes with some difficulty), add in the cauliflower. 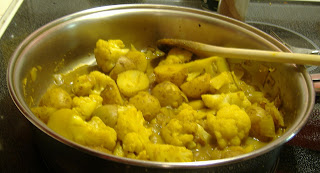 Again, cover the pot and cook until the cauliflowers become soft and a fork can be inserted into them easily.

It’s very important to add the cauliflower when the potatoes are almost cooked or they’ll be overcooked.

Add salt and sprinkle garam masala and fresh coriander to finish. This dish should be served bone dry, ideally with some naan or roti.

River's Note:
Excellent quick version of this dish - I'll be making it this way now Those who don't enjoy their Indian dishes quite as hot and spicy as we do, however, should be aware that the chilli powder in the recipes means powdered chillies (I used cayenne) and might find it a bit HOT. Please add your chilli powder with due caution.
Posted by River at 2:09 p.m. 3 comments: