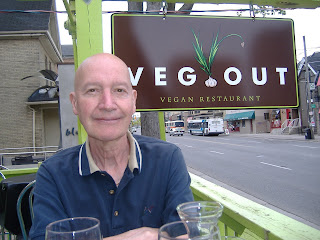 Some time ago I enjoyed a fake 'fish' dish at Montreal's ChuChai vegetarian restaurant - well, several times, actually, along with fake prawns and fake chicken etc. etc. They did it very well, and all went brilliantly with the Thai flavours. Since then I have had soy and wheat meat substitutes of various kinds at Candle 79 in New York, at Toronto's Fressen, and in London, Ontario, including most notably at Veg-Out on Richmond Row. It was Veg-Out's renowned 'Fish' And Chips and (not to mention a delightful Daily Special of tempe Red 'Halibut' In Cashew Crumbs) that made me want to try to create my own version of faux fish. Just for the fun of it! 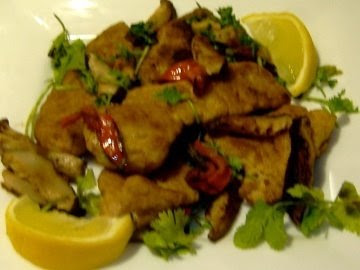 I had been hoping to find someone with a tried-and-true recipe for a fish-flavoured wheat meat (seitan) or soy meat on one of my groups, but it's a bad time of year to be asking people to be in their kitchens or even thinking of it. One kind person sent me a link to this page (thanks, John!): http://www.vegan-food.net/recipe/1197/Seitan-Seafood-Scallops-Fish-Clams-Shrimp/

I settled for the simple seitan formula in the above link and made half a recipe in the fillets of fish shape - although I made them a bit smaller than what is usual, I think. The photo above shows the fish, lightly pan-browned, before adding the sauce which I made with peanut, coconut, sambal oelek, mirin, and basil etc. Lovely. I'll put a photo of my plate, with sauce added, below. 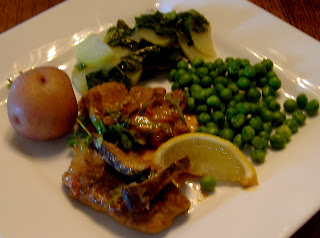 As you may be able to see, we had it with small potatoes, steamed kohlrabi and new peas - eschewing traditional rice accompaniment for once.

A couple of days later we finished it off with a slightly different combination of vegetables - cut into smaller pieces and sort of stir-fried with mushrooms, onion, halved cherry tomatoes and cilantro (coriander leaves) and very lightly sauced with low-sodium tamari and mirin. The image is, I'm afraid, blurred - but the flavour was not.

I'm going to work on this recipe. When I've got it right or as close to being right as I can get, I'll post on it again :) I fancy some seitan salmon and seitan scallops and maybe even seitan smoked trout or whatever. Just for fun!
Posted by River at 7:41 a.m. 6 comments: