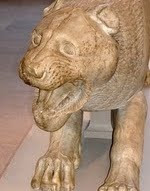 Well here I am, after more than three months, persuaded that it is better to blog than not (for the time being, eh?). But where to resume???? I had photos that I have just junked because I couldn't remember what any of them were about - and most looked pretty boring to my eye anyway. I mean, without a recipe, what's one stew as against another? On the other hand (and there is usually one around here) this is as good a place as any to talk about food faves and food places as well as new products and restaurants.

For this post, then, I am simply going to give you a few snapshots of foods that we have particularly enjoyed recently.

OK, here's an easy dessert we make when we have the ingredients: 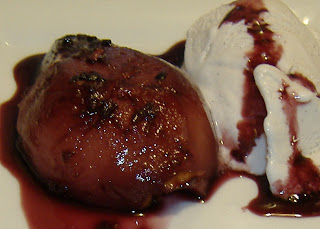 Obviously, one sweetens the wine a bit, adds a selection of spices and (for my taste) a little orange zest to help it all along. The icecream was commercially made, but was made of coconut milk rather than soy - something I'd not had before. We buy this when we can and have just a little with fresh fruit. Excellent.

There have also been two major vegetable 'discoveries' for me. I'm not saying I'd never had these before - of course I had - but I certainly hadn't cooked the first in my own kitchen or prepared the second in the way I've done here. 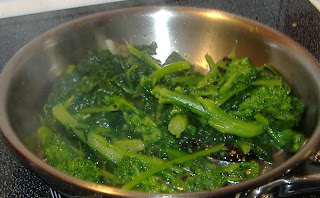 And what's that? Well, the more clear-sighted will spot that this is broccoli rabe or rapini. Lately (and I do mean since New Year) I've gone quite mad over it. Funny how tastes change. 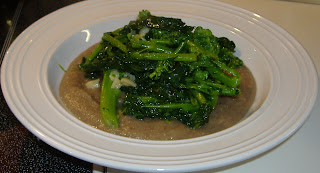 This is an Italian dish, and I got the recipe from Madhur Jaffrey's World Vegetarian cookbook (one I swear I'd choose to take to a desert island with me). Its quite simple, all oniony and garlicky, and the rapini is cooked separately and heaped on the pureed bean mixture (served at the bottom of an old-fashioned wide soup bowl, as above). Excellent.

Actually, we liked the fava beans (something else I'd not cooked at home, now that I think of it) enough to have them a couple of times more this month, the next time with chopped kale (not photographed - looks much the same) and after that with bokchoy and a more 'asian' hint to the flavourings.

The other thing I hadn't actually tried at home, folks, was roasted Brussells sprouts. Now this might have something to do with the 'kept-warm' dishes that awaited my after-school ramblings to my grandmother's house yea these many years ago. Her Brussels sprouts were like dark little bullets by the time I got them, and if it wasn't for the fact that I was an amenable child they might not have got eaten at all. However, a good pal on a group (thanks, Beth) assured me that I should try roasting Brussels sprouts deliberately rather than accidentally. I thought there was no way of improving on the delightful taste of this vegetable (yes, I'm one of those who love anything even remotely resembling cabbage), but I was sadly wrong and have been blaming myself for being too stubborn to try these before. 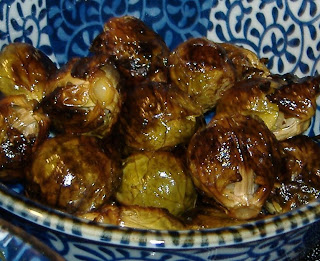 Since I try to be careful about oil, I simply sprayed the bottom of a roasting tin very lightly indeed, popped the sprouts in and rolled them around along with a little oregano, then roasted them as I was told to do: until they turned a lovely dark caramel-like colour. If you've enjoyed these, you're laughing at my amazement. If you haven't had them before, then you're in for a treat. They turn so sweet and the tiniest bit crisp on the very last outside layer. Good hot from the oven, room temperature or cold. There won't be leftovers.

And to finish of this mad post, here's my first and second attempt (don't laugh!) at making/rolling my own (dah-dah-dah-daaaaahhhhh!) SUSHI! 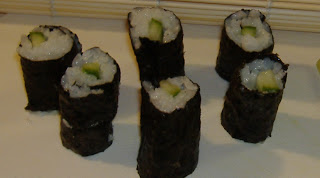 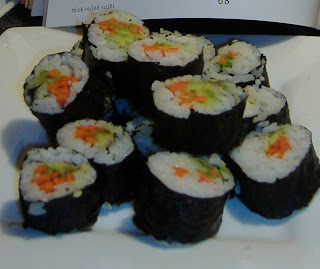 There were more than a little ragged, but oh they tasted so very very good. I made some for New Year and we just wolfed down every bite and never quite got round to more than casually sampling the other snacks. I was surprised how easy it was after the first couple of times (this is genuinely the first and second try shown here - as I say, pretty ragged!) and how much better they taste being made of your own fresh ingredients in your own kitchen just before serving. Of course the adventure improves the appetite too.

I'll come back to this in future blogs (consider yourselves warned).

And now, continue to try to enjoy this new year of 2010. If you, like us, get off to a bit of a shaky start, remember there's the lunar new year (Year of the Tiger) coming up mid-February and we can all start fresh.

And as for me, I (like King Arthur and Macarthur) shall indeed return ;-)

P.S. The pic at the top of this blog? Oh, just an attention-getter and my belated New Year gift to you all. Cheeky aren't I?
Posted by River at 2:55 p.m. 2 comments: