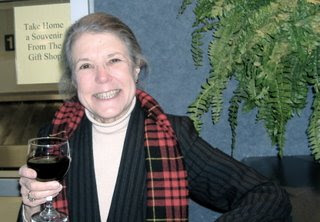 My apologies for neglecting this blog yet again! I have some new recipes and ideas for good food to post any day now AND I have just returned from New York where we had some fab dining experiences which I am going to want to try - just try - to reproduce at home.

For those curious, interested, or simply bored, try going to my other blog - River Rambles - which has a rather longish account of where we were and what we ate - photos and all for the most part :)

You can find it HERE - headed by this rather silly pic of me at the airport after waiting hours and hours for a flight out!

Dithering :) - Plus Some Food Pics

Here was lunch today :) I did two of these - but we couldn't finish them at all - too much salad to start, I'm afraid. But oh my they were really good! I didn't write down all the ingredients nor do any real measuring, so I'll have to save the recipe for another time. However, there was long-grain brown rice, wild rice, mushrooms, some marinated tofu, onions and garlic and chilies, green peas, water chestnuts and I forget what else all steam-sauteed together in a pan then stuffed into the peppers with various herbs and spices (which is what made it all so very good) and put in the oven with a seasoned crumb topping.

We must have been in the mood for stuffed dishes lately, because the other day I made 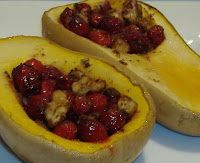 This was a pale imitation of a recipe from Erin Dame's Vegan Done Light e-cookbook found here. Great as a side dish with a whole lot of things, I guarantee.

Somewhere along the line lately I made a couple of versions of stroganoff - one using faux beeef strips, one using portobello mushrooms, but somehow that photo has been lost while moving things from one computer to my new one :( (The photos in this post were still on the camera, however, so that's how these came about.) Never mind - it was good (if a bit bland for me) and I will be making it again and posting photo and recipe.

Meanwhile, I have been dithering, hence the title of this post, about to Raw or Not To Raw. I had decided, with help from the dh, that it was too difficult to do it the way we would like in the winter (this part of Canada is not all that far from Michigan, but a long way from California and Florida!) and, also, we weren't ready to forego our hot meals in icy weather. As a result, when I came to the end of the cookbook recipe testing, rather than going back on raw food (well, highly raw food) as planned we continued with the cooked variety, making all sorts of things again that had not been in the cookbook, especially things with soy in them. Around this season a lot of good food is tempting!

And now? Well, we looked at each other today and decided that as much as we think we'll be making a few cooked dishes during the week - and perhaps even a hot soup in the evening - we are going to slowly revert to our attempt to go raw. So satisfying! Now how's that for an about-turn!

My last photo is of the kind of stir-'fry' dishes I like to make now and then - no recipe really needed, perhaps, although I sometimes do do a twist on the usual ingredients. I may not be making so many of these, although the are wonderfully quick and easy, don't you think! Asian food lends itself so well to a vegan lifestyle, and spicy vegan food makes vegan eating a delight!