Simple meals: Vegetables solo or combined with others are quick and easy to prepare and full of flavour. A little tofu or tempeh can provide an interesting contrast of texture. We try to eat lots of greens. 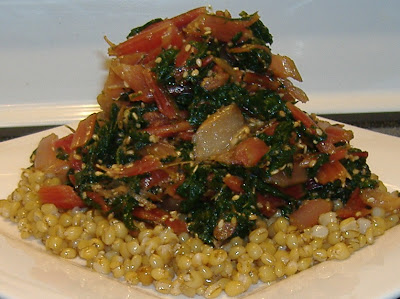 This was a lovely twist on steamed greens. For this I used red chard, because it's so pretty (and was available at the market, let's face it!), which I cooked very lightly and treated with Japanese seasonings - rice vinegar, light soy, a little wasabi, a touch of pickled ginger and a few drops of sesame oil - all to taste. The seeds are just a scattering of sesame seeds more for appearance than anything else (although I love sesame).

This was all tossed together while the chard was still hot and placed on a bed of previously cooked (and hot) wheatberries - in lieu of rice.

Most successful, and to be repeated :)


Stir-fried vegetables with tofu are a stand-by when there's not much else hanging around the refrigerator and I lack the energy or time to make something inventive. 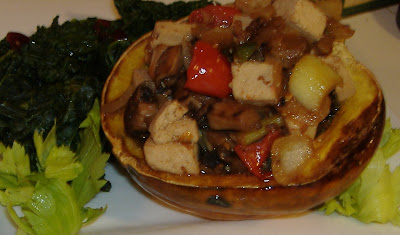 Obviously the squash had been previously prepared and was waiting in the refrigerator to be discovered and made the centre of attention. While reheating the baked squash in the oven, I quickly chopped bell peppers/capsicums, onions, mushrooms, celery and whatever else I had lying around and stir-'fried' (okay, cooked in a little water) them together with cubed tofu, garlic, ginger and a little light soy sauce. These were kept pretty crisp, stuffed into the hollow part of the squash then returned to the oven while we had our salad course. This is tasty and the presentation, which is no trouble at all, makes it seem rather more special than just a plain stir-fry. You could serve this with rice or another grain, but we don't usually bother except to add sometimes some steamed spinach or kale. 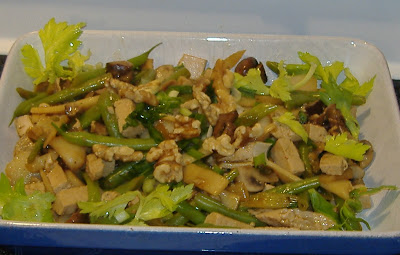 Another simple meal. Left-over Chinese vegetables - bamboo shoots, water chestnuts, and if you have them handy some of those baby corn cobs (I didn't have them here), are added to green beans and some onion and quickly stir-'fried' (I try not to use oil, as you know) with the usual suspects - ginger, garlic, crushed chilies and light soy. There are a few walnut pieces on top for crunch and interest. Serve with rice, alone, or with some homemade bread (as below). 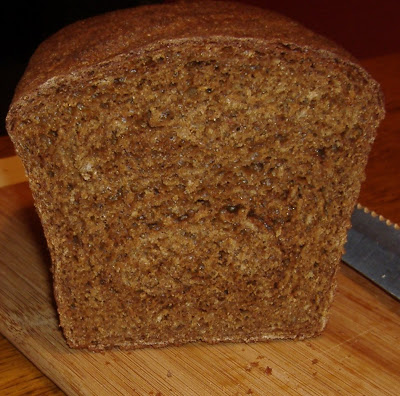 In our house, it goes with whatever we're serving, although we have it much less often than we used to do. I usually save it for one of those evenings when soup seems the simplest and most obvious choice.